I had some quick ideas about a few topics and decided to group them into overrated and underrated.

While it is true that sharing is a skill that parents should help children learn, many parents focus on it way too early.  Child development specialists will tell you that in the first few years of life, children are ego-centric and unable to notice or care about the needs of others. (This is a general statement.  There are times when young children notice and care about loved ones, but the rarity of those times is what makes them so sweet.)  Around the age of four they start becoming more aware of their peers and having more of a desire to “get along.”  This is the time when sharing can be emphasized, and children will be able to learn and understand the concept.  Focusing too much on sharing before this is like saying, “If I start young teaching him to tie his shoes, he’ll be really good at it!”  We all know that kids will eventually learn how to tie their shoes, when their dexterity and coordination allow them to.  Different kids reach that stage at different times, so there is some benefit in “starting early” but there’s also clearly a time when shoe-tying lessons would be completely ineffective.

When young children first start playing with other kids parents should focus more on keeping the peace than forcing kids to share.  You can model problem-solving by talking problems out.  At first you will do all the talking, but as you do so you teach the words and phrases that the children will eventually say themselves.  (See Use Your Words).  If a child is not sharing, don’t worry about it, and certainly don’t punish him for it!  Soon his desire to please his peers will naturally kick in and sharing will become easier.  Too much focus on sharing creates bossy kids.  It’s better to have a child who is adept at problem-solving than one who makes sure everyone else ‘follows the rules!’ 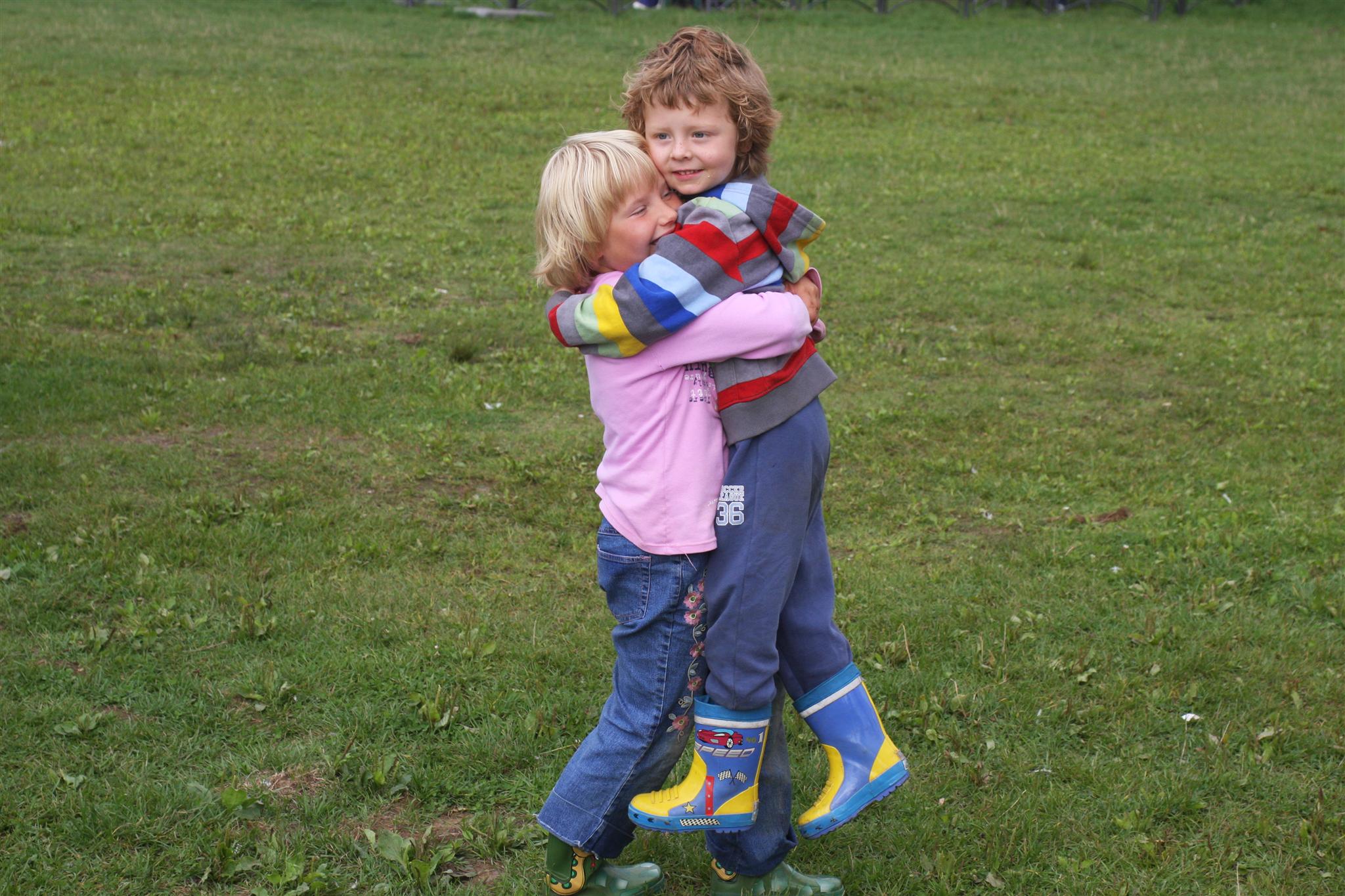 Children need more of our time and attention than many parents realize.  They are attention sponges, and their need for it can get overwhelming.  But try to remember that when you focus directly on your child, you are helping him in so many ways: emotionally, physically, and mentally.  Neural connections are created and strengthened in his brain when you listen to him and have conversations with him.  In these interactions you non-verbally teach appropriate social skills, reinforce your emotional bond to each other, and build your child’s self-esteem.  You communicate to him that he is important and worth listening to.  So much is accomplished in these seemingly mundane moments.

For newborn babies, gazing into a parent’s eyes is exercise.  Their heart rate goes up and their attention is focused.  It is a mentally strengthening activity.  For the first year of my baby’s life I try to have this one-on-one, focused interaction for 10 minutes every day.  I smile and talk to her and rub her arms or legs.  It’s a very bonding time.  After about ten minutes the baby will look away, indicating she is tired.  This is her cue that she’s done ‘exercising’ and needs a little time to look off in the distance.  She is processing what she just took in.

For my toddlers and preschoolers I carve out at least ten minutes a day to spend one-on-one, playing or talking.  I try to make this a habit by tying it to some other routine, such as doing it every day after lunch.  I play whatever the child wants to play and let the child lead the interaction and discussion.  It’s difficult to put other things aside and spend focused time with my child.  I’d rather get to my ‘to do’ list than sit on the floor and play ponies.  But I know it’s so important to the child’s development and to our relationship.

Once children are in school all day it’s harder to quality spend time with them.  After school they have homework and dinner and activities.  But it’s still important to have regular one-one-one interactions with each kid, even if it’s once a week or once a month.

This is a word that strikes fear in parents.  They fret that if they aren’t consistent children won’t learn that they are serious about the rules.  Being consistent is important, of course.  You don’t want to have different rules and consequences all the time.  Consistency helps children know what to expect and shows them that they can rely on you.  But it’s a little over-emphasized.  Situations come up where flexibility is important.  When you’ve been out late or have a guest staying with you or your child seems to be going through a growth-spurt – these are times when you can stray from the normal rules and make exceptions.  You don’t have to be so locked into being “consistent” that you can’t use your own judgment about the situation at hand.

I think follow-through is more important that consistency.  Follow-through has to more to do with short term situations than overall rules of the family.  If you ask a child to complete a chore, following up to see if it’s done is crucial.  If you say you’re going to give a consequence for a certain misbehavior, do it.  But, you should think about what you’re going to say before you say it!  (Even then, if you speak in the heat of the moment, it’s okay to come back a few minutes later and apologize and explain that you weren’t really thinking clearly, and the consequence (or threat) that you gave isn’t reasonable.  This is still a form of follow-through.)  Follow-through has to do with you being present and aware of what children should be doing and when.

We encourage our children to use their words when they want something, including an exception to a rule, and that means that sometimes we end up bending that rule (not always, though).  Consistency is a principle to look at over the long term – are you generally consistent?  If yes, then it’s okay for exceptions in some situations.

You and your children probably spend a lot of time at home.  The home is the environment your children are most comfortable in, and it has a great impact on whom and what they will become.  Why not fill it with inspirational and educational materials in places children can easily see and access?  Surround your children with the good things of the world.  I’m sure you have family pictures on the wall and books on the shelves, which is a great start.  Both those things are important.  But you could also include poems, inspiring quotes, and scriptures.  You could print out history facts and famous quotes and tape them to the wall.  This will be of interest to your child and the papers taped to the wall can serve as a reminder to you to talk about those things and teach your child about that person or time period.  You could also listen to snippets of classical music and learn about it together. Children are very interested in new stories and in learning about interesting people.

My husband has a small notebook of copies of famous paintings from a college humanities class.  We hang one picture at a time on the fridge.  The kids notice it and read the title, and sometimes we discuss it.  My goal is that when they encounter that picture in their own college humanities class they will say, “I’ve seen that before!”  One of the keys to this infusion of knowledge is changing the wall hangings on a regular basis.  People quickly get accustomed to whatever is around them and stop noticing it.  So every few weeks or months, change it up!

In this age of helicopter parenting, there are a lot of tasks that we rush to help our children with that they could very well do on their own or at least should be able to attempt to do.  The importance of allowing children to try for themselves starts when babies are first playing on the floor.  When they reach to grab a toy, don’t hand it to them right away.  Let them reach and struggle; this will work new muscles and brain pathways and motivate them to move in new and different ways.  That same logic can be continually applied as they grow.  Children gain self-confidence when they are able to be independent.  We should praise their efforts in trying to accomplish something, rather than rush in and do it for them.  I like to say, “It feels good to do things by yourself, doesn’t it?!” to reinforce the positive feelings of self-reliance.  Sometimes they end up doing the task by themselves because I was taking too long to come help them.  In those cases I congratulate myself for being too busy to help because they learned they could do it on their own!

There are many situations where an adult can see that a child won’t be able to do the task, for example, opening a restaurant door.  But to jump in and help before letting her try gives the impression that she can’t do things and shouldn’t try. We don’t want our children to think they should only try things they know they are good at or they know they can do.  We want them to try all sorts of new things, even if they are unsure of their abilities.  In general, people like to try.  Let your children try.  It’s hard to hold back when you know they won’t be able to, or when it would be easier to do it yourself.  But it only takes a few seconds or minutes.  Don’t help until they ask.

This goes for opening things, making things, doing homework, doing chores, and many more tasks.  It takes longer and sometimes is frustrating to watch, but it creates independent, can-do kids.  Allowing children to do things for themselves will result in teenagers who wake up to their own alarm clocks, do their homework independently, and remember their own appointments!

In the book Parenting with Love and Logic it says,

“Everything we fix for our kids, our kids perceive they are unable to fix for themselves.  If there’s more than a ten percent chance that our child might be able to work it out, we should keep clear of the problem.   The greatest gift we can give children is the knowledge that . . . they can always look first to themselves for the answers to their problems.”